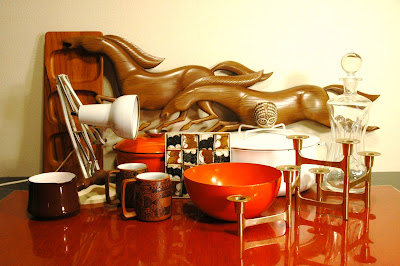 Seattle, resting on the Puget Sound like oversized sweatpants, has some serious Scandinavian roots. The Ballard neighborhood in particular has forever been home to an astounding number of seafaring Danes and Swedes. This glorious convergence spells at least two things for your average Seattleite: excellent facial hair sightings, and a serious cache of Mid Century Scandinavian goods. In the same way that I imagine Michigan swimming in Eames' chairs, the scores we find in our lovely little burg tend to display a distinctly Danish bent. Taking in regional culture, sixty years after the fact, through the lens of the thrift store is one of the most engaging parts of what we do.

And then, you have a day like today, where the Danish Modern Thrift Gods of Seattle take it upon themselves to smile in your general direction. Eudora and I had a major run today, and got to come home with a carload of awesome goodies. 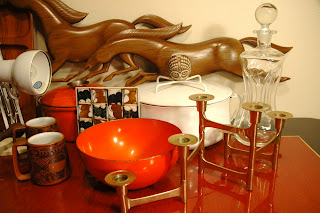 Among our finds from today are four pieces of enamelware from three of our favorite companies: an orange Cathrineholm pot, an orange Finel bowl,and a stunning white Dansk Kobenstyle dutch oven and brown butter warmer. We also came upon a large Holmegaard Kluk Kluk decanter, which we're always ecstatic to find (word to the wise: the Kluk Kluk looks particularly righteous filled with colored liquid). We also found a folding brass candelabra, a strange but inviting Modernist equine wall hanging, and a Luxo task lamp. Next up was a wonderful Sowe Konst teak tray. As if this weren't enough, we came upon three of our favorite finds on the last stop of the day: an Ellen Malmer designed trivet for Royal Copenhagen, an Edvard Lindahl owl figurine for Gustavsberg, and this pair of mugs: 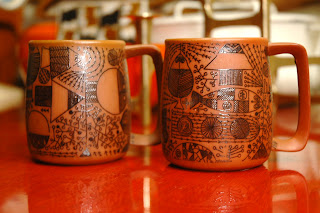 We're totally stumped on this pair. We adore the illustration work on them, but just can't figure out a maker. We would love to get to the bottom of it, if anyone out there can help!
Posted by JUNKHOUSE at 10:09 PM 6 comments:

Growing up in a Southern California burbclave was, for the most part, about as exciting as one would imagine. My formative early years appear now, in the muddled imagery of memory, as a maelstrom of youth sports and fast food (the one, true cuisine of the L.A. megatropolis); all car rides and heat, stale French fries and broken air conditioners. By the time I was born in the middle of the Reagan administration, the Orange groves for which the area was named had disappeared beneath a mountain of cheap stucco and alien species of flora (so much better suited for landscaping), giving the entire area a feeling of displacement, as if there was no real sense of cultural identity outside of the mass-marketed “surfer” thing that in actuality had no real-life counterpart to speak of anyway. As a moribund thirteen-year-old, it felt as though the future described in dystopian Sci Fi novels had been achieved in the California desert, with surprisingly dull effect. Equal parts Manifest Destiny and basic human egoism, Orange County had swallowed itself at some point in the early 80’s, becoming a pastiche of its original intent. As a young teen discovering cynicism and boredom, I was sure that at some point the area must have been happening, though I couldn’t for the life of me figure out what it could have been, looked like, sounded like. Of course, I now know that the answer, for me, is largely made up of two disparate movements, both of which command equal parts of my fickle, picky little heart: California Modernism and Punk. It probably would have taken me much longer to discover the secret history of So Cal had it not been for a few local tastemakers-cum-historians who, in the face of devastating sameness, championed the achievements of Orange County weirdos. Lucky for me, Mike Atta owned a shop five minutes from my folks place in Fullerton.

Unbeknownst to pre-pubescent me, Fullerton, California had been a hot bed of Southern California punk, birthing a cavalcade of great (The Adolescents, Agent Orange) and not-so-great (Social Distortion, The Offspring, and too many more to count) bands. Mike’s band, The Middle Class, are easily the most influential and arguably the best, essentially begetting hardcore with their uber-classic E.P. Out Of Vogue. Playing shows with Black Flag while still in high school, The Middle Class were by far the smartest of the early L.A. punks, forgoing the antics of The Germs and the dull gothic Americanism of X for something faster, leaner, and far more effortless. It is, essentially, why all of us get to wear out our Minor Threat records. The Out of Vogue E.P. is as definitive as it gets, and it was made in 1978 right down the freeway from my high school.

In October, Eudora and I were visiting my parents for the obligatory once-a-year family throw down, and were left in the unenviable position of being car-less in Southern California. While my kin took care of their daily obligations, the two of us were left with nothing to do and nowhere to be for an entire afternoon (which is, in fact, how I best remember the place, anyways). I mentioned a Goodwill down the road as a possible destination, especially because it was on the way to the one great Mid Century store in Orange County, which I knew she’d absolutely flip out over. When she asked me what it was called, I flatly told her: Out of Vogue. “Like that Middle Class song,” she added, as we gathered various corn-based snacks from my mom’s well-stocked pantry for our trek.

Out of Vogue, a staple of downtown Fullerton, had been the only shop I would step foot in when accompanying my parents on trips to the nascent city center. Even as a kid, I obsessed over the pointy-legged furniture, bright colored plastic, and well-worn bowling shirts. Now, when Eudora and I stopped by, knee-deep in our current love affair with Mid Century design, it was even better. Because, man, has the owner got taste. I mean, capital-T, perfect taste. The shop is a veritable shrine to enamelware and the atomic, a great commingling of Danish and California Modern, a Valhalla for Mid Century nerds. If it said Dansk, Cathrineholm or Heller, it was here. There was so much Eva Zeisel, it made the eyes bug. A pair of Milo Baughman lounge chairs sat warmly next to some Kartell nesting tables, while a Panton print looked down, as if to say, “Let there be style.” We were, as any good design junkie would be, totally blissed out. And then, the owner, Mike, introduced himself, and we spoke for an hour about thrifting, and we all lamented how hard it is to find Lotus bowls these days; and Mike told us all about the recent happenings in Fullerton, like the new club where the retro arcade used to be, and how the Dead Kennedy’s had played there, and about how he was just an old punk rocker, and how things moved slower nowadays. It was during all this, the discussion of my two loves, punk rock and Modernism, that I finally realized: “It’s the same fucking guy…”

See, Mike had named his shop after the Out of Vogue E.P. because he was actually in the band. While I was wandering the post-apocalyptic landscape of Southern California, looking for something a little more, well, exciting buried underneath the blacktop, here was a guy who was living it. Playing in bands, driving across the country hunting down Eames chairs, and spreading the word of good taste all across the L.A. area, Mike had been holding onto the real history of Orange County, quietly transmitting the message to kids like me that THERE IS SOMETHING OUT THERE. You just have to dig a bit.

So if you’re ever making a stop in Fullerton, perhaps to grab a burrito before resuming your drive to anywhere else, make sure you stop at Out of Vogue. Marvel for a minute at Mike’s collection, enjoy the presence of more Eames than you can imagine, and throw on the Minutemen when you get back into your car. See, Southern California’s not so bad…

Listen to the Middle Class
Posted by JUNKHOUSE at 9:50 PM 1 comment: