For our inaugural post here at Junkhouse, I wanted to give back to the Internet community of thrift-addicts and rummage-aholics who’ve been so integral to our developing fixation with Mid Century design (perhaps one day I’ll devote an entire post to the Blob-like growth of this obsession, as it has been what can only be described as “utterly monomaniacal” for some time now).  In settling on a topic of (slight) expertise on which to pontificate, I wanted to make sure that I chose something vastly overlooked, underappreciated, and, frankly, unloved, seeing as though so many other outlets have thoroughly covered the more beloved aspects of thrift store culture. So, I tuned out the sounds of surrounding Seattle, shut my eyes, and visualized my favorite thrift. I could see it all: rows and rows of under-arm-stained clothing, a veritable Blockbusters-worth of tired VHS tapes, the piles of dust-ridden housewares (with more faded Tupperware than I’d care to mention). And then, in turning a mental corner, I came upon that most forlorn area of the thrift store, where only those with too much time and not enough sense spend hours pouring over Pop Culture’s forgotten sons: the LP shelf. Lost your copy of “Mitch Miller and the Gang?” Look no further! Feeling as though your life’s been lacking the pick-me-up only provided by Barbara Streisand’s more onerous records? You’re in luck, because they’ve got twenty copies just waiting for you! It’s a sad fact that the vinyl selection at most (okay, fine, ALL) thrift stores is, at best, completely terrible. That’s why I’ve compiled a list of the four best albums one can easily locate at the local Goodwill. Amidst the Neil Diamond and Olivia Newton John, these L.P.’s are surely hiding, hoping to convince you that even in the musical Hades that is the thrift store, there’s always something worth digging for… 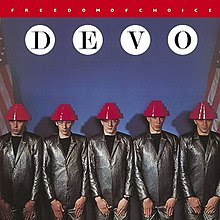 DEVO – FREEDOM OF CHOICE
We have “Whip It” to thank for the glut of pressings made of this record, and the inclusion of said overplayed song is a small price to pay for the inexpensive availability of such a happening album. From the opening stagger of “Girl U Want,” which sounds like it was composed by four robots on a lot of strong coffee, to the dystopian pop of “Planet Earth,” this record finds Devo positioned squarely in-between their two major creative impulses; namely, the low-brow brilliance of Sci-Fi paperbacks and their obsession with the Situationists. What results is an incredible hodge-podge of B-Movie humor and Neo-Marxist critique, all set to the sounds of 2025’s greatest pop band. The song “Gates of Steel” is the obvious highlight, breaking out not only the strongest hook of the album, but also the only song with an even slightly positive outlook. Even having heard it over a hundred times, the “A man is real, not of made steel” refrain still gets me psyched-up like I’m watching the end of “Die Hard” (when the evil quasi-Russian guy finally get his due). Having to endure “Whip It” would be worth this moment alone, but luckily the rest of the album is peppered with excellent nuggets of synth-pop, all with a tingling punk back beat. Plus, there’s that cover. So sweet.

MADONNA – SELF TITLED
This one’s probably going to catch the most flack, as Madonna’s legacy has been irrevocably tarnished by the exploits and music she’s produced since, I don’t know, 1985. But before there was Guy Ritchie, 19-year-old boyfriends, and (shudder) the weird octopus-mummy hybrid her body has recently become, there was “Borderline.” A steady beam of Moog, drum machine, and sugary melody, this song is the height of the bizarre art that is “professional songwriting,” making up for what it lacks in artistry with pure bubblegum pop goodness. Sure, the major metaphor of the song makes little to no sense (what does love have to do with immigration?), and it repeats the same two hooks over and over again for nearly five minutes, but there’s something amazingly right about where the melody sits. It’s one of those magical combinations of notes that, although unimaginative, makes your ears want to party. There’s an almost early-Beatles vibe to the writing, as if the perfect hook was the ultimate end, in and of itself. Plus, there’s little commitment to the areas one probably wouldn’t want Madonna focusing on anyways. Take, for instance, the lyrical content: aren’t we better off with mixed metaphors about borders, rather than, say, Madonna’s actually feelings about border issues? And better yet, who cares if the lyrics are cringe-worthy, as long as it gets your booty shaking? And get it shaking it does, my friends, on nearly every track. When it comes down to it, who doesn’t have an extra quarter to spend on what promises to bring you an entire afternoon full of head-bobbing, hip-thrusting fun? 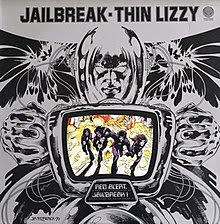 THIN LIZZY – JAILBREAK
How many other bands do you know with the tenacity to rhyme the word “Romeo” with the neologism “own-e-o?” None, that’s how many, because Thin Lizzy traveled their own road, a road composed of dual guitar lines, hysterically inane song lyrics, and sweet 70’s moustaches. Everyone knows the ubiquitous title track, of which I’m still unsure whether it is supposed to be read figuratively or literally, as well as the classic montage-scene soundtrack choice “The Boys are Back in Town” (cue “the boys” getting back in shape for their big match against the local jocks, or some such).  It’s the other songs, the lesser known of the bunch, like the aforementioned “Romeo and the Lonely Girl,” that really make this album worth the half-dollar it’ll cost you at Savers. The real winner on this record is “Running Back,” which was initially chosen as the first single, but got edged out by the slightly fist-pumpier “Boys Are Back In Town.” For the amount of cliché these guys tend to swim in, there’s something almost forlorn about that track, which makes it immediately more appealing than its bar-rock brethren.  Plus, it’s got that amazing “sha-na-na-na-na” coda, which shows of front man Phil Lynott’s incredible grasp of Irish scatting techniques.  “Running Back” adds just a touch of gravitas, which really keeps the rest of the albums soaring cheesiness feel just a little more grounded. And although there’s an undeniable “commercial” feel to this record, who doesn’t like a little stadium in their rock from time to time?

SERGIO MENDES & BRASIL ’66 – SELF TITLED
I’ve saved my favorite, and easily most available, choice for last. With a sound that immediately calls to mind game shows of the late 60’s (which, I’m unsure why, counts as a plus in my book), this record is probably at every single thrift store in the country; in fact, most of them probably have multiple copies. And their loss, my friends, is your gain. Featuring a lounge version of the Lennon-McCartney classic “Day Tripper” and a swinging cover of Little Anthony and the Imperials “Goin’ Out of My Head,” this L.P. is still the definitive Bossa Nova record, bringing to mind everything great about 60’s Tiki culture. The highlight is definitely “Mas Que Nada,” which sounds like every bit of muzak you’ve ever heard combined into one succinct melody, which, because it accomplishes its goal so clearly, is a strange sort of uber-achievement. This album isn’t suited for every day listening, nor will you find many moods congruent with the sheer bounce of this album; however, when the timing is right, and you throw this gem on when everyone’s perfectly ready for its unique sense of pep, minds will be blown. You and everyone you know will groove away in a haze of kitschy bliss, humming along to every song whether heard for the first time or not. It’s a particular sense of joy, the pure immersion in something as historically “uncool” as this album, and if you can snag it for cheap, it’s an incredibly affordable way to experience the very best of Mid Century camp. Like all the other records on this list, not only is Brasil ’66 an essential to any self-respecting music dork, it also makes digging through countless Neil Sedaka records slightly easier to handle.
Posted by JUNKHOUSE at 1:13 PM 2 comments: